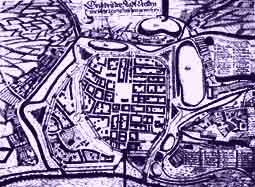 cityplan 1529
Originally the area of the present Neumarkt was not part of the city of Dresden. Situated in front of the citywall and the „Frauentor“ was the Gothic church „Unsere Lieben Frauen“ and its graveyard (lower left in the picture). Various roads branched off in an eastern direction from this little irregular square, such as the Pirnaische Straße and the Rampische Straße. Only the Juedenhofwas located inside the fortifications. 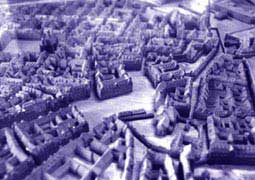 During the Renainssance the appearance of Dresden was a greatly changed. The capital city of Saxony which had become the principal resdidence of Duke Moritz expanded so that the area of the Neumarkt became the part of the municipal area in 1548. An extravagant fortifications system with a city wall and a moat was built to defent the city from any oncoming attack. During this period the future structure of the Neumarkt began to evolve. Magnificent renaissance houses like the old Gewandhaus located on the former city wall influenced the appearance of the square.
But until the eighteenth century, the large graveyard of the old gothic Frauenkirche considerably reduced the size of the square. Among the political events the execution of the reformist, calvinistic, Saxonian chancellor Krell at the Jüdenhof on the 9th of October 1601 is outstanding. 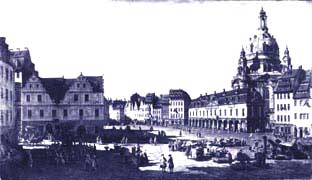 Bernardo Bellotto, The Neumarkt in Dresden as seen from the Moritzstrasse (1750)

The famous, fully evolved townscape of the neumarkt as a complete work of art was created during the golden age of Augustus the Strung during the early eighteenth century. By means of strict regulations concerning the number of stories, the arrangement of the facades and the material uses for the buildings, a most mature sence was created and is one of the greatest achievements of baroque civic architecture. The large paintings of Bernardo Belotto (Canaletto) shows us in a clear and vivid way the low buildings of the Renaissance standing side by side with the four five store houses of the bouregoisie.
The left side of the picture shows the Gewandhaus which was torn down in 1791 to make way for a planned symmetrical baroque square. The Altstaedter Wache was located in front of the Frauenkirche and prewented a complete view of the monumental dome as an entire unit … 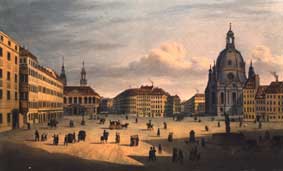 Neumarkt with the Frauenkirche as seen from the south (1820)
During the Seven Years War (1756 – 1763) the Neumarkt was badly damaged by Prussian troops. Almost the complete Pirnaische Vorstadt and with it a large part of the eastern Neumarkt burnt down after heavy artillery shelling on July 19th, 1760. Considering the traditional structure of the plots the destroyed areas were reconstructed in the plain and moderate design of the Dresden late baroque style. Compared to the rather irregulary laid out square before 1760, the Neumarkt in the late baroque period, now without the Gewandhaus and the Hauptwache (the ruins of which having been torn down in 1766), displayed a sense of perfect harmony and clarity. 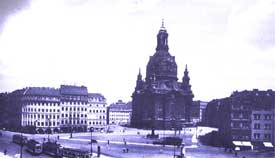 The Neumarkt, view towards the Frauenkirche (1931)
The erection of the Frauenkirche marked the change in the history of the Neumarkt. As the central building, it was exactly „adjusted“ to the irregular appearance of the square. The church and square merged into a unit.
Without the Frauenkirche, built by George Baehr, the Dresden Neumarkt would never have achieved such a tremendous importance in the art of European urban development. Not only did its stone dome dominante the skyline of the old town, it also completed the picturesq ue view of the narrow alleys around the Neumarkt. Only the Frauenkirche built between 1726 – 1743 as a monument to Protestant beliefs and bourgeois sensibilities gives structure to the Neumarkt. Reconstruction has been going on since 1994 and is to be completed for the 800th anniversary of Dresden in 2006 incorporating elements of the ruins and stones retrieved from the rubble. 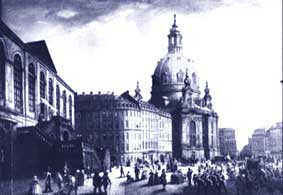 Robert Wehle, The Neumarkt with the Frauenkirche, 1847

During the nineteenth century there were only a few changes at the Neumarkt apart from two new buildings in neorenaissance style. One of them was the „Au petit Bazar“, the first department store in Dresden, erected in 1851 by von Bothen with big display windows at the corner of Neumarkt/ Frauenstraße. The important historical townscape of the Neumarkt remained preserved in its well-balanced urban composition until 1945.

The Neumarkt also played a very important role in the political life of the city. During the German Revolution of 1848/1849 there were fierce battles between democrats and Saxon-Prussian troops between the 3rd and 9th of May. The Neumarkt espacially became the centre of the heavy steet- and barricadefights. The royal troops took the barricades by storm and arrested the revolutionaries in the Frauenkirche. The longed for German unity and a national constitution, for which the revolutionists with the black-red-golden banner had struggled, had to wait for another 22 years until 1871. 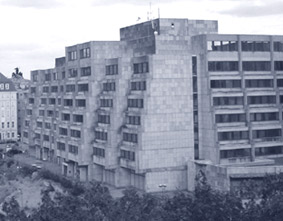 The destruction of Dresden began on the 9th of november 1938, when the worked up national socialists all over Germany set fire to the synagoges, thus also the one in Dresden by Gottfried Semper. After World War II which was started by Hitler Germany and resulted in millions of deads, the fire returned to the German Reich. In February 1945 the art historically highly important Dresdner city centre was turned into a heap of ruins. The space round the admonitory ruin of the Frauenkirche remained unbuilt for decades. Admittedly the GDR government made a big effort to reconstruct some of the monumental buildings of historical heritage, such as the Johanneum, the Royal Mews, the House of the Estates, the Academy of Arts, the Albertinum and the Landhaus. On the other hand several facades which could have been reconstructed, such as the Rampische Gasse were deliberately blown up.

Miscellaneous plans for the Neumarkt in the fifties and seventies did not come about. Not until late in the seventies, when an extension of the police headquarters was necessary (because of an increase in the Stasi watching and an inhanced police dictatorship) a huge terrased building in sandstone covered prefabricated construction was addded. It was demolished 2005. The postmodern dollar hotel Hilton (unprovided for East German mark) was not finished until after 1989.

The ruin of the Frauenkirche, which had been stylized as an anti-war memorial, played a special role in the late eighties in the silent demonstrations for more democracy and freedom around the memorial day on 13 February. Candles were lid quietly and wishes made for disarmament in East and West („Swords into plowshares“).

On 30 October 2005 the Dresdner Frauenkirche was reconsecrated by the Saxonian regional bishop Jochen Bohl with worldwide media attention. After the reconstruction of the gorgeous baroque church has been completed, the urban sorroundings also emerge at a surprisingly fast speed. Dresden is recovering its old town centre with a pioneering mixture of tradition and modern. It its our hope that love for our native city and an open mind towards the world will characterize the square in a united, peaceful Europe of the 21th century.