The aerea of the Dresden Neumarkt („New Market“) between Kurländer Palais (Kurland Palace) and Taschenbergpalais (Taschenberg Palace), between Brühlscher Terrasse (Brühl Terrace) and Wilsdruffer Straße (Wilsdruff street)was a self contained aerial monument of untitled baroque architecture with european quality until its destruction 1945.

The middle of this outlined aerea consisted of an irregular arrangement built by three places merging into one another: Jüdenhof (that means court of jews), the Neumarkt and An der Frauenkirche (that means near by the church of our Lady).

The Neumarkt was climaxed by the singular dome of Georg Bähr Frauenkirche and formed with it heart and soul of Dresden. 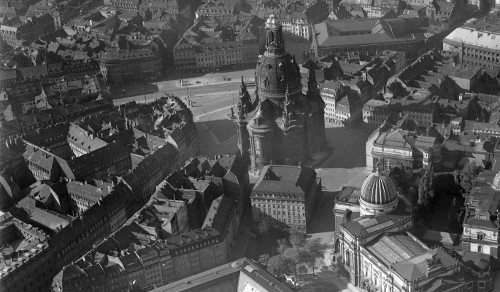 Like the famous buildings of saxonian court, of church and of middle class in the aerea of castle, Zwinger and theatre so the historical Neumarkt belonged to the architectural and urban developing heights of Dresden.

Allied bombers in the night of 13th to 14th february destroyed all residential Neumarkt buildings alike complete inner city due to the war of aggression started by Germany.

At post-war-time with its ideological instigation overzealous GDR planning authorities removed the remained ruins apart from little exceptions. Dresden monument preservation officers by much personel dedication could save valuable art historic fragments out of the rubble to integrate them at the planned reconstruction. 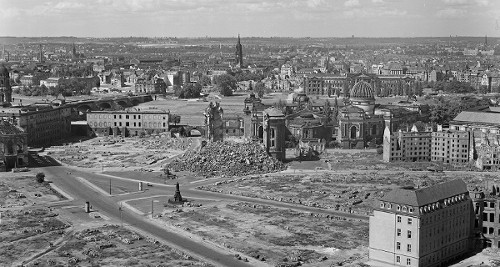 Lasting for decades Neumarkt remained undeveloped. Only in the 80ies the unsatisfactory slab construction of police headquarters annex was created (pulled down 2005) and Hilton new building, looking for compromise of light historic and post modernist art.

By 2006 Dresden 800 anniversary sight changed decicively. The Frauenkirche became reconstructed as a symbol of reconciliation between the nations and in 2005 was solemnly consacrated. Round the sacral building new accomodations crow up in the first decade of the 21 century. On the one hand they give back a valuable remembrance to the former baroque identity. At the other hand the new accomodations are witness to a presence dynamically changing with an optimistic outlook on a common european future. 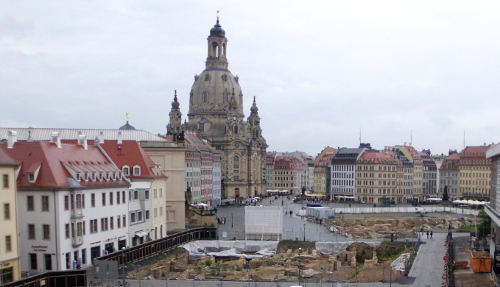 Dresden Neumarkt with accomodations completed and still to be built (may 2014)
photo: T.Kantschew

Neumarkt reconstruction obviously has made good progress – not without public quarrel about the future look of the buildings. Until today rough two thirds of the place with its eight accomodations are finished. There is still a lot to do. Further efforts are requested.