Showing of the reconstruction of complete complex Hoym Palace complex

including Riesch Palace at Rampische Gasse (lane) by Andreas Hummel (2013): 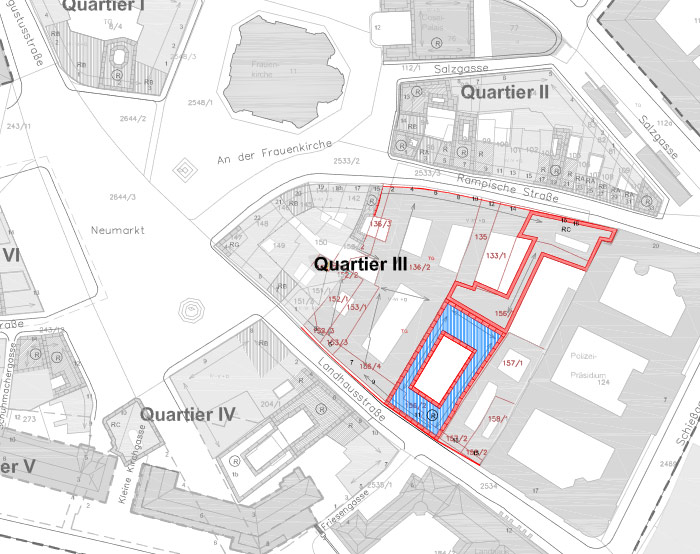 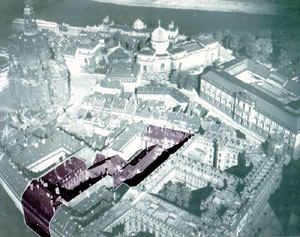 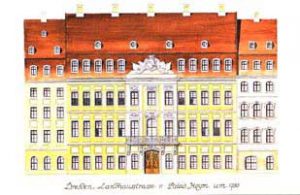 The largest aristocratic palace conserved until 1945 in the Neustadt aerea was Hoym Palace extending to several courts between Landhausstraße 11 and Rampischer Straße 16/18.

The palace arose 1739 by order of chief equerry count Johann Adolf of Brühl, brother of prime minister. In the cool generosity of saxonian rococo Johann Christoph Knöffel erected 1739 – 42 the main building at Landhausstraße. The building 1760 was destroyed during the seven-years-war and reconstructed once more by Count of the Reich Hoym, new owner since 1752. The new created splendid rokoko door on this occation presumable was a work of J.Deibel.

Since 1766 in possession of electorial Privy Councillor W. von Riesch the palace was remodeled by architect F.A.Krubsacius into a four-wing-plant with ballroom section and extended itself by adding of further buildings now to Rampische Straße.
After acquisition by Dresden association „Harmonie“ about 1830 the building changed repeatedly. On january 5th 1848 Robert (and Clara) Schumann launched the „Verein für Chorgesang“ (coral society) in the rooms of the „Harmonie“, one of the predecessors of „Singakademie“ (academy for voice) (see: Armin Gebhardt: Robert Schumann. Leben und Werk in Dresden).

The palace until its destruction 1945 domiciled the „Conservatorium für Musik“ (academy for music). The well of Knöffel saved from the courtyard for a long time stood in the annex of the police headquarter (pulled down 2005). 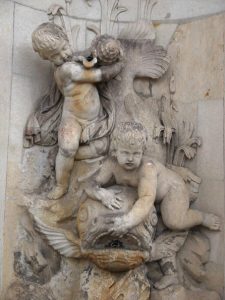 Original well figures (in former court of Hoym palace) erected in a recess of police headquarter annex building.
The stored parts of the well shall be included in the new building scheduled as a ranking building. Photo: Thomas Kantschew 2003 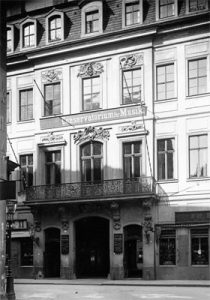