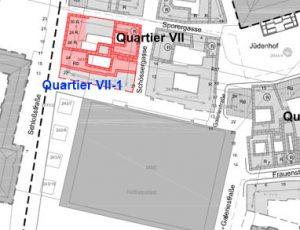 site plan: municipal planning (red marked: ranking buildings und front reconstructions the accomodation is bounded by Schloßstrasse in the west, by Sporergasse in the north (adjouning to Q VIII), by Schössergasse in the east and new Rosmaringasse (r.lane) in the south. 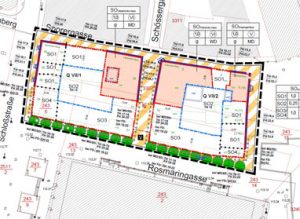 The noble block of flats with large-scaled ground plans built in 1740/50 had court fronts with lesenes and a well inside. The front to Schössergasse, also with lesenes showed middle risalit
with projecting covers and rococo decoration. The mezzanine with bow windows were separated with ledges. The house in its unity of court, ground plan and fronts represents one of the most beautiful examples of that time. 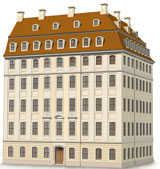 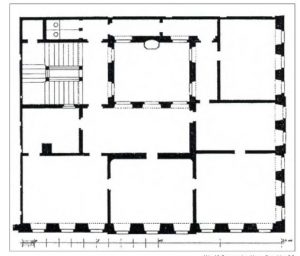 The simple building with early baroque two-floored oriel was divided by wall pillar and corinthian capitals and showed early baroque decoration in the parapet. The  interior showed a beautiful portal assigned to mannerism.

a noble block of flats originally with manneristic gables. Window jambs and corner rusticity in their profiles point to a 16th century construction time. In the 19th century after pulling down of the dainty gables the 5th floor was topped. The oriel represents one of the highest-quality works about 1610. In its parapet zone in the first floor there was a bas-relief with a portrait of elector Christian II and his wife Hedwig of Danmark, in the pedestal the coat of arms of March of Meißen, electoral Saxony and Danmark (today in municipal museum). 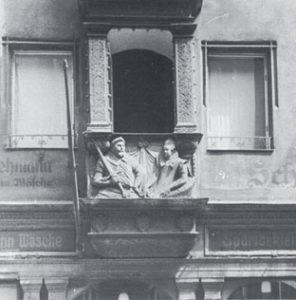 Schlossstraße 30, oriel of 1610 with portraits of elector Christian II and his wife Hedwig of Danmark. The relief is in good condition (Foto: Deutsche Fotothek/SLUB 1944)