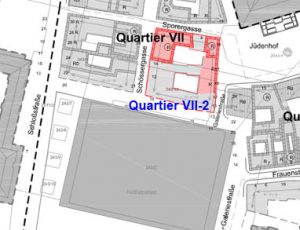 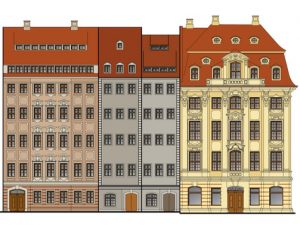 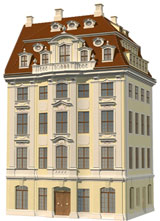 In 1716 G.C.Dinglinger, brother of famous goldsmith Melchior Dinglinger, acquired the 1710/11 building. It was singular for Dresden with its swinging front,  pyramid roof superstructure and its elegant stretched proportions and the most important dwelling house at the same time. The separate forms like mock balustrate, project cover, work of tendril and apex block correspond to those at Zwinger and Taschenberg Palace and show a high degree of fusion – a hint to architect Pöppelmann. The front softly swinging in the middle part only had different consol capitals on light stepping forward colossal pilasters. Their vertical movement was compensated by ledges. The front building („risalit“) in the middle showed projecting covers, stuccos in the panel and profiled jambs. Above a sandstone balustrade the three piece cross house was built up. The original dormer ventilators showed small oval windows.

(picture:  house of Dinglinger, condition about 1750) 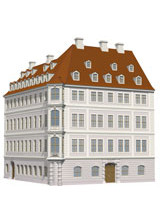 The refined noble block of flats with three floors from the end of the 17th century with very large-scaled ground plans and beautiful proportioned court in 1791 got a fourth floor in adjusted construction. The simple fronts with corner rusticity over all floors were topped by a hipple roof also after raising. The oriel to the street in the balustrade zones of its windows had pilasters, capitals, apex blocks and decoration.